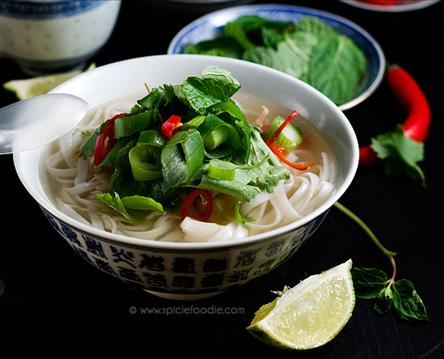 1. Place chicken pieces and water in a pot with enough water to cover.

​1. The ginger and onion need to be charred. Place them both over an open

​Charring the onion and ginger:

1. In a clean pan dry roast the spices to bring out the scents and flavors. Roast for 2 mins. stirring often to prevent burning. Remove from pan and set aside to cool.

1. Peel the onions, and using a knife gently scrape away the charred ginger skin. Cut the ginger into 4 chunks and use the flat edge of the knife to bruise the ginger.

Now back to the charred ginger and onion:

Set aside to cooldown.

char evenly throughout. (I used an open flame and it took me about 8 mins.)

charred under the broiler setting in the oven. Turn the onion and ginger to

flame/gas stove flame, or on top of a very hot griddle, or they can also be

pot ready to use. Next rinse off the chicken pieces then place back inside the

Set the chicken pieces aside. Rinse/wash the pot our or have a new clean

​Bring to a boil. Use a colander to drain the chicken and discard the broth.

their own or top the soup with them.

rice noodles to the soup bowls then ladle the chicken broth over the noodles. You can either serve the additional garnishes on the side so everyone can add

1. Once the soup has finished simmering, strain and discard the spices and carcass - NOT THE BROTH. Thinly slice or shred the chicken breast. Add some cooked

heat down to medium low and leave a small crack to allow steam to escape. Simmer the soup for at least an hour. longer if time allowed. I simmer my pho for about

Add 2 liters or about 8 cups of water to the pot. Then add the 1 tsp. granulated sugar and 2 tbsp. fish sauce. Cover and bring to a boil, once boiling reduce

1. Place the ginger, onions, cooled spices into the pot with the chicken pieces. (Alternatively the spices may be placed inside a spice bag before putting in pot.)